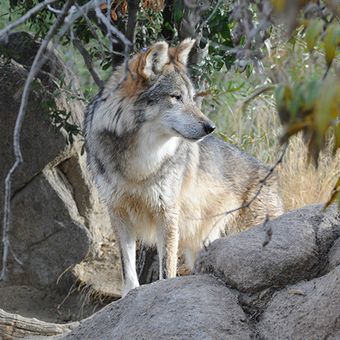 The Mexican Wolf is the smallest subspecies of gray wolves are highly social and mate for life. Females give birth every other year. Breeding occurs in later winter and after a 63-day gestation, some four to eight blind and helpless pups are born in a den. The male hunts to feed his mate during the six to eight weeks nursing period. After a month or so the pups emerge from the den to receive food from both parents and other pack members.

You can help us save Mexican Wolves and other species from extinction by supporting The Living Desert’s conservation efforts through the adoption program. Together we can save and protect wildlife around the world.