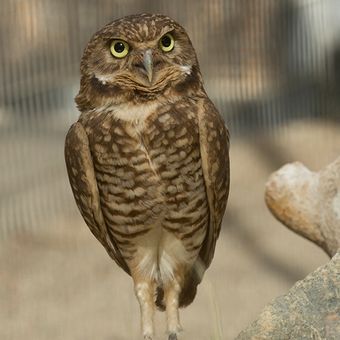 Burrowing owls unlike most other owls are largely diurnal (active during the day) and live on ground. They perch during daytime at the entrance to their burrows and nest in single pairs, or more commonly, in small colonies. Though they can dig their own burrows, they usually enlarge one dug by a small mammal, such as a squirrel or other rodent. They use their wings, beaks and feet for modifying or creating a burrow. These owls have lost much habitat due to urban or agricultural development.

You can help us bring Burrowing Owls and other species back from extinction by supporting The Living Desert’s conservation efforts through the adoption program. Together we can save and protect wildlife around the world.